Due to switching jobs, and my beloved 2013-ish MacBook Pro finally failing on me for good, I’m in a somewhat unsuspected situation: The only computing devices available to me are my smartphone and an old Chromebook which Google gifted to me at MessengerPeople, so we could have a Meet coversation with their sales people.
It is a rather old and cheap model, with a slow dual core CPU and 3GB of RAM–all in all, the last thing you’d probably want to do any reasonable software development on.

Now, what is also special about the current situation is that I absolutely have the time to follow stupid ideas all the way through! Assessing the situation, I have a low-performance local device and a high(er)-performance VPS with Hetzner. Pretty much what the picture looked like to mainframe operators in prior decades: They solved the demand for workstations by using cheap thin clients connecting to the expensive mainframe backend, and this is exactly what we’re going to do–build a portable development environment, accessible from any type of low-power device over the internet.

TL;DR The code is available on GitHub: Radiergummi/portable-development-environment .

Usually, I work with Jetbrains’ PhpStorm exclusively, which is pretty much the gold-standard in IDEs to me. Its heaps of features and convenient auto-completion of course come at a price, though, which is the amount of compute resources and memory it guzzles. Intellij, the Jetbrains platform, is built on Java (probably Kotlin, by now), and its definitely showing. Therefore, PhpStorm is out of the question.
Looking around for lighter solutions, I first took a look at web-based code editors, available as Chrome apps, such as Caret . That might be a viable solution if you’re only looking to write markdown documentation or something, but it’s certainly unsuitable for actual software development.
Finally, I learned about code-server , which is basically just a headless Visual Studio Code, accessible via HTTP, rendering in a client browser instead of Electron. This makes a lots of sense in a way–if an application works exclusively using web tech already, there’s no reason not to make use of it. code-server is maintained by Coder , which more or less provide a battle-tested, commercial variant of what I’m attempting to do, so check it out if you’re interested.
While code-server has sort-of authentication built in, I’m not going to rely on it. Having an IDE with a shell and file system access exposed over the internet is risky enough already, so instead, we’ll need some sort of authentication proxy between the web and the application. To model the flow of HTTP requests, I usually rely nginx , which has us covered here: By using the auth-request module , we can authorize all requests for a given location. This module merely queries another HTTP endpoint, passes the original request, and evaluates the status code of the authorization server response to decide whether to deny or forward the client request.
There are sveral solutions available for such an authentication proxy, but I decided to go with Vouch Proxy , as it is straight-forward to setup and does exactly what I want it to, namely forward authentication to an OAuth2 provider of my choice!

As soon as the number of applications involved in a system grows, I host them with Docker. This might seem overkill, but after years of setting up and maintaining Linux servers, I’m no longer inclined to waste time here when I could simply define the full stack with docker-compose and move on. Therefore, my VPS is essentially just a (hardened) Docker host.

So to sum up, we need a compose stack with:

Finishing off, we will also need a domain for our IDE and one for vouch, both of which require an SSL certificate to be served securely. This will actually be pretty expensive, because… ha, just kidding! It’s 2020, Let’s Encrypt is everywhere and for the life of me I will never buy a certificate again.

I’m going to skip the introduction to Chromebooks here, suffice it to say, they run a heavily customized, Google derivate of Gentoo, basically only exposing the Chrome browser as its user interface. For some reason, I suspect users bugging Google, ChromeOS got the capability to run a Linux “VM” (there’s a super-interesting description of its internals available here , which also explains why VM has quotes around it). This is integrated elegantly into the system, enabled with only a few clicks in the UI, and amounts to a Debian shell with password-less sudo.

To enable the Linux VM, simply open the settings app, navigate to Linux (Beta), and follow the wizard. As soon as the shell window pops up, we’re ready to continue to the server side of things. Let’s quickly generate an SSH key and dial in to the box:

I’m assuming a fresh, uninitialized server, updates installed and hardened security. I’m probably going to do a write-up of that in another post soon.

First up, let’s install Docker the recommended way. Despite the documentation being quite clear on this, I’ve seen people do an apt install docker way too often. So doing this correctly involves exactly the following steps:

Now you’ve got Docker installed, but you’re still not able to use it without root privileges. The internet contains approximately a gazillion issues on this, but the solution is quite simple! We just need a group for Docker, and our user needs to be a part of it:

We probably want Docker to start on boot:

What I like a lot about docker-compose stacks is that we can design it iteratively - get the basics to work, refine the services, restart. So let’s start by defining the raw services:

Here, we define our three components and the way network communication is intended to flow: The front proxy (nginx) will listen on ports 80 and 443 of the host itself, so it’s the entry point into our system, from the internet.

We will configure nginx to forward requests for the IDE to the ide service, and authentication requests to auth-proxy next. To do so, we add our configuration files:

Here, we override the main nginx configuration file with our own. It should look like the following, with the default values omitted for brevity:

This configuration defines two virtual servers: One for vouch, our authentication proxy, and one for the actual application. The vouch server simply passes requests to the vouch service defined in our docker-compose configuration–we can take advantage of the fact that Docker even handles the name resolution for us.
The second server for our application also passes requests to the application service, sets a bunch of request headers, but more importantly: It enables the auth_request module and configures nginx to pass all requests to the vouch validation endpoint first. Vouch checks whether the request is authenticated, and either redirects them to the login page or signals nginx to let the request pass through to our app.

If you’ve looked carefully, you might notice both blocks listen on port 80, with no mention of SSL yet. Getting Let’s Encrypt certificates and their renewal to play nicely with Docker requires some effort, so we’ll get back to that later on.

For vouch to actually validate requests for us, we’ll need to tell it how to do so. While vouch actually supports environment variable configuration, I’ve found it to be more convenient to use a configuration file instead. The first step is updating our compose configuration with the path to this file:

We set an environment variable that points to our configuration file (in the context of our container file system), then mount the file from the working directory to the configured container path.
The contents look akin to like the following:

It’s important to get the domain list and OAuth provider configuration right. You’ll probably want to set this up according to your liking, but I’ve found maintaining an OAuth app with GitHub the easiest in the past–no extra hoops to jump through, and straight-forward documentation.
Take a look at the example configuration file for detailed information on the available directives.

So the first thing we’re going to do is, again, adjusting the docker-compose configuration to mount our data properly:

As this container is our development environment, we want certain data to persist across restarts. Our volumes are used as follows:

We’ll get to each of those in more detail later on. First, let’s focus on the Dockerfile.

It has actually two purposes: First is building code-server, second defining our runtime environment. That fits nicely with multi-stage builds! So first, let’s define the build image only.

This will install the code-server package and subsequently build it, resulting in a node_modules/ directory containing the server binary and all dependencies.
As the next step, we want to define the runtime environment. This is heavily specific for your own workflow, so I’ll keep this as generic as possible:

My setup starts from the php-cli image instead, installs xdebug, composer, yarn and a few other packages in addition to what you see above. As I said, this is very much the stuff you require for your own workflow, so customize this image as much as necessary.

Before we get to finally boot the stack, we’ll have to adjust file system permissions on the host:

And create the configuration file for code-server:

If you’re using Cloudflare or a similar service, you might want to consider skipping the Let’s Encrypt part and simply configure your CDN to terminate HTTPS for you. Otherwise, read on for automatic renewal from within a Docker stack.

There is a guide by @wmnnd which descibes this process in greater detail available on Medium .

First off, we’ll need to modify our front proxy service:

This adds a volume for certbot configuration and one for its web root to complete challenges, and overrides the nginx command so it will reload every six hours and apply eventually renewed certs.

The nginx configuration must be modified to have a new, HTTP-only server block:

Modify the virtual server blocks for auth and ide with the usual SSL stuff (make sure to update the certificate path!):

Don’t worry, I’ve got the final versions of the configuration files in the accompanying GitHub repository , too!

Finally, you can either do the last bit of footwork manually using the certbot image or just adapt @wmnnd’s excellent script to your setup:
init-letsencrypt.sh .

What does this leave us with?

We have just created our own, code-defined development environment. It is able to run everywhere Docker is running. It is hosted securely, only accessible to us. Its power is only limited by the server hardware we put below it. It can be powered down and back up again at any time!

As soon as you fire up the stack with docker-compose up -d, the services will start. If you’ve configured everything correctly, you should now be able to navigate to https://ide.example.com and be greeted by the UI of Visual Studio Code.
On our Chromebook, we can install the progressive web app using the small plus button in the URL bar. This will also open the editor in its own, Chrome-less window, and is probably the next best thing to running VS Code natively on any other notebook!
It looks like this on my box: 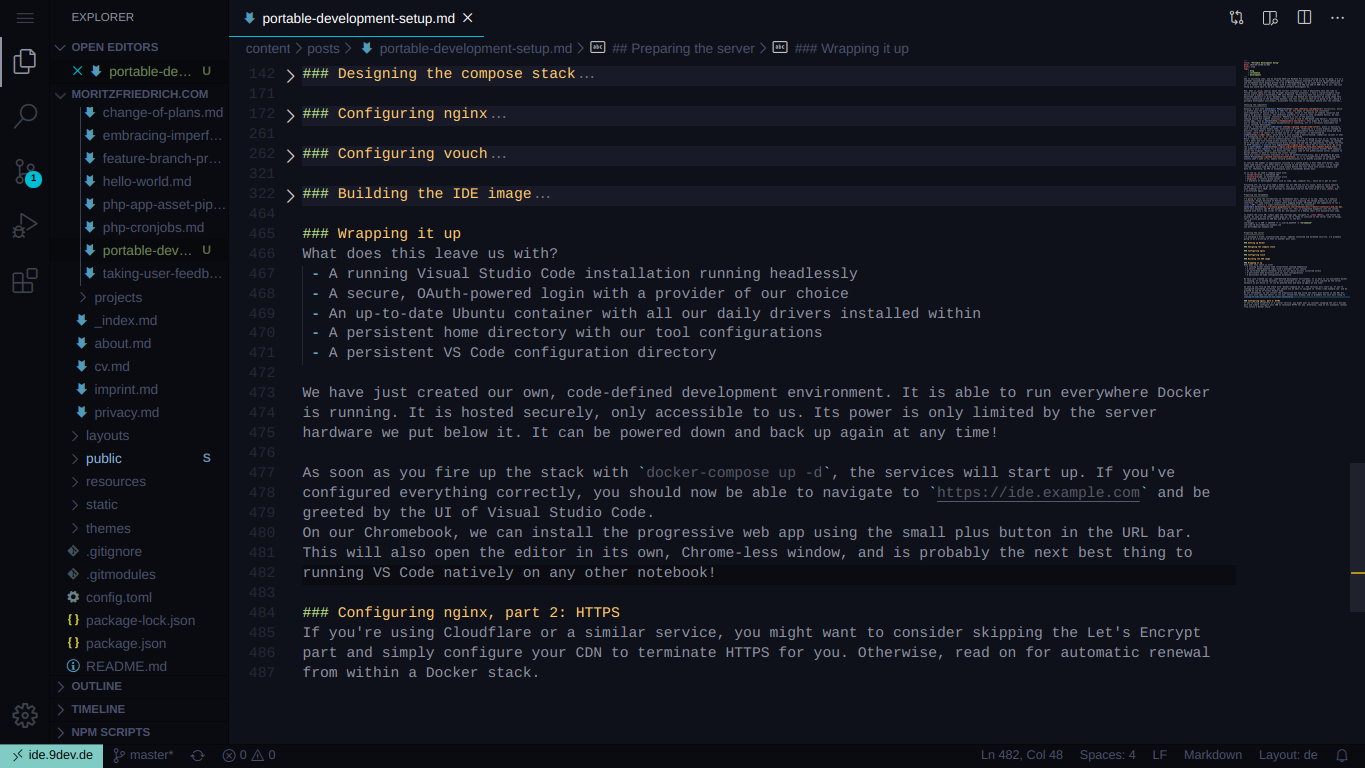 I’m soon going to work with a beefy, new MacBook Pro from the current generation, and definitely going to use PhpStorm again. Nevertheless, I’m both astonished what’s possible with current technology and proud of the environment I’ve been able to bootstrap in an afternoon of work. No matter the situation, I will always have an emergency IDE available from anywhere in the future. If I was working with Visual Studio Code primarily, I would really consider this setup as my go-to environment!